After the war former members of the 60th  and 87th Battalions formed a veterans group, the “6087 Overseas Association”.  Brigadier General F.S. Meighen and Lt. Col. Gascoigne were Honorary Presidents.

The Association created a logo that incorporated the Battalion patches of the 60th and 87th. Even the logo seemed to emphasize that the 87th had absorbed the 60th.

The President in 1936 was Walter Hobkirk Scott, a Military Cross winner while a Lieutenant with the 87th. At the association’s Annual Meeting in May 1937, 457744 Herbert Edward Green, a Quartermaster Sergeant who served with the 60th, replaced him. The organizations policy was “once a member always a member” They met periodically, and at the Annual Meeting in 1937 decided, they would charge membership dues, but the dues were voluntary. They had a Ways and Means Committee headed by 178126 George Matthew Crossgrove, who attested to the 87th and was immediately made an officer. The committee helped members with financial matters when they could not afford them.

The association held a “Twenty Years After” reunion in Montreal from November 11 to 13, 1938 to mark the twentieth anniversary of the signing of the armistice. About four hundred men attended, one hundred and fifty of those were from out of town. On November 11th they attended the Cenotaph service, after which the men from out of town attended a reception at City Hall and a group of men from the 87th went to Mount Royal cemetery to lay a wreath at the grave of Sgt. 177239 John Francis Young. Pte Young was awarded the Victoria Cross for his bravery as a stretcher-bearer on September 2, 1918 during the 87th’s attack at the Drocourt-Quéant line. At seven o’clock that evening, the association gathered at the Windsor Hotel for a dinner.

The logo was made into a lapel pin that the men worn at the 1938 Reunion.

It was a well-publicized event, even the T. Eaton Company recognized it with an ad in the Montreal Gazette welcoming the men to the reunion and reminding them of the store hours. At the reunion, they took a picture and used it as a Christmas card for 1938.

Inside is the group photo they took at the reunion with an inset photo of a horse, named Queenie. Queenie’s hat matches the members hats and has the Battalion Patches of the 60th and 87th on it.

My name is Reg Gervais. I am the author of the book , “The Silent Sixtieth- 100 years on”, a detailed history of the 60th Battalion Victoria Rifles of Canada.  This website is a tribute to the men who served and hopefully an extention of the book and a valuable resource to those researching the battalion or the men who served.  new informaion is being added constantly. 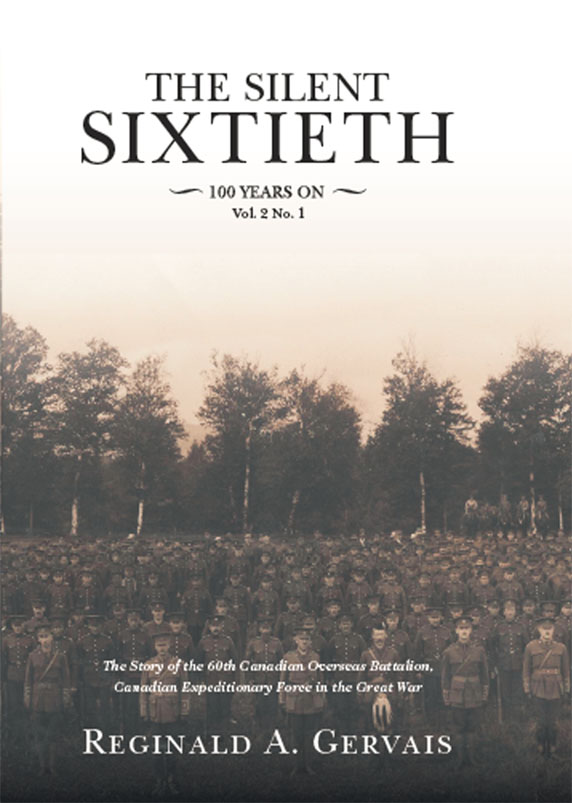